How to take great firework images with your M camera:

Some places may seem great for a fireworks show but can totally suck. San Francisco is one example. The fog is so persistent and pervasive I’ve been skunked more than a dozen times. Logistically it’s not clear where the best viewing would be. I recommend biking into the City since you’ll be much more mobile and won’t have to worry about parking and traffic as much. Expect the fireworks to shoot up into the fog and the fog to change color when they explode and that’s about it.

When I was in NOLA for NYE 2019 the fog was all over and the fireworks were not very visible. Of course you can’t control weather like Storm, but you might consider a different city if the one you’re in is prone to fog or other bad weather.

This is tough, especially if you’ve never been to the venue for fireworks you’ll need to scout and might have to move once it starts. Ask the people there if they know where the fireworks will shoot off from. I scouted up and down this beach before settling on this reef of rocks. Wind direction is key. Notice how the smoke is blowing away from the fireworks since I’m upwind from them? Check the wind direction and get upwind.

Once you know where they shoot off from, figure out what you want your background to be. Next figure out what you want your foreground to be. A good foreground is key to a good fireworks shot. Most people just point their camera into the sky but the best shots have scale and a visual reference point like the shore and people looking up at the fireworks. That way we know just how massive the fireworks are.

Reassess and move if necessary:

Once you see the first few fireworks shoot up and explode, you can fine tune your composition or throw it out all together and start over, but the whole show only lasts 30 minutes so you have to move fast. Don’t be afraid to change up the composition too. 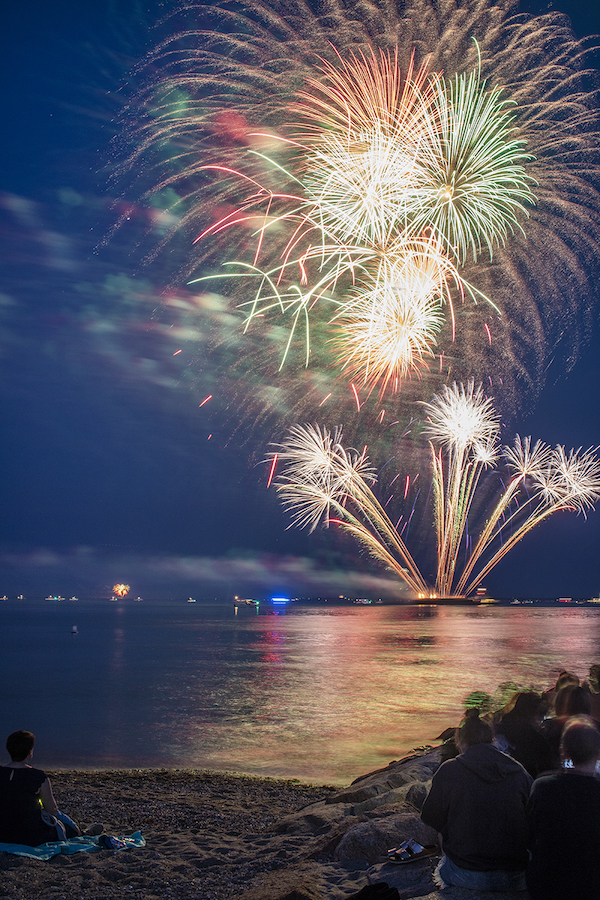 Don’t attempt photographing fireworks without a tripod and a wired or wireless remote.

Set the exposure mode to Manual. ISO 100, f/8, Bulb. Practice setting up the camera like this at home to make sure you know how. Take several test shots so you know how to work the remote with Bulb before getting to the site.

Start the exposure when rockets shoot off from the ground or barge and then let go after they finish exploding fully.  Check the image for good composition and readjust as necessary.

July 4th fireworks only happens once a year around 9:00-9:30pm for 30 minutes so if you don’t get a keeper, you have to wait a year. Solution: Don’t worry about it, just keep shooting. There are some cities that have NYE fireworks and fireworks for other occasions so just check online to see what’s going on in your city.

Smart phones and selfies in the foreground. Really distracting. Solutions: Recompose people out of the image or stay with your composition if it’s working and hopefully they’ll put away their phone and enjoy the show in front of them. Photoshop can be an alternative but in this shot it wouldn’t work well.

Overexposure. It’s not that the camera setting were wrong, it’s just fireworks vary in intensity and you never know what you’re going to get next so just follow the plan in Shooting Technique above and hope for the best.

Firework isn’t big enough to fill the screen.  View some more full articulations since you might have to recompose. There is so much variance though, some fireworks explode huge and others relatively small. If this is the usual size when fully articulated then recompose and zoom in so firework will fill the frame.

This image has multiple issues: Firework does not articulate well or fill the frame. Overexposure. Smoke is a common problem. Wind helps with this, but some fireworks just seem to produce more smoke than others. Just keep shooting and hope for a keeper. The foreground could also be improved.